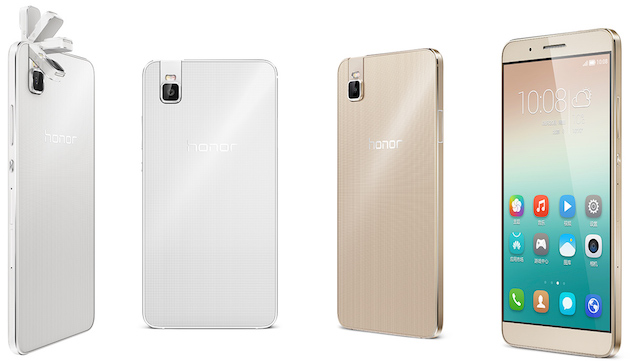 Chinese telecom tech giant Huawei has announced a new smartphone Honor 7i, Which features a 13 megapixel dual LED flash camera that can rotate 180 Degrees, Basically, Great interest those who spend most of their time to take pictures. Huawei Says that it can withstand at least two years of usage with 132 flips per day. The Honor 7i like all other terminals of the mid-range and thus inherits the same specs from Honor 6. It is available in China with two versions 2 GB RAM and 3 GB RAM costs at 1,599 Yuan (approximately Rs. 16,500) and 1,899 Yuan (approximately Rs. 17,500).

There is another interesting point to consider. Huawei has also placed a fingerprint reader on the left side that doubles as shutter button for the camera. Fingerprint reader for the first time on the portion of the terminal. And also it can be used to unlock the smartphone  as well as click photos.

With this system, it can be used for selfies or even video conferencing and it’s quite interesting because it is equipped with an Sony Exmor RS sensor 13 mega pixels rear camera with an optical topped able to open f / 2.0. So it should get very good results in most lighting conditions.

The Honor 7i is equipped with a 5.2 inch screen that can display a type definition of Full HD 1080p (1920 × 1080). Against all odds, and an aluminium frame, under the hood the manufacturer has opted octo-core Snapdragon 616 64-bit clocked at 1.7 GHz and the chip Adreno 405 coupled with 2 GB RAM and 3 GB RAM, Same for the storage space that ranges between 16 GB and 32 GB. The battery itself does not change and  a capacity of 3100 mAh, includes dual-Nano SIM slots, Compatible WiFi, Bluetooth and 4G LTE support, and runs with the operating system Android 5.1 update comes with EMUI 3.1.

Anyway, this announcement gives hope to the beautiful innovations. But there’s no information on global release date. This is unlikely to arrive in the United States.