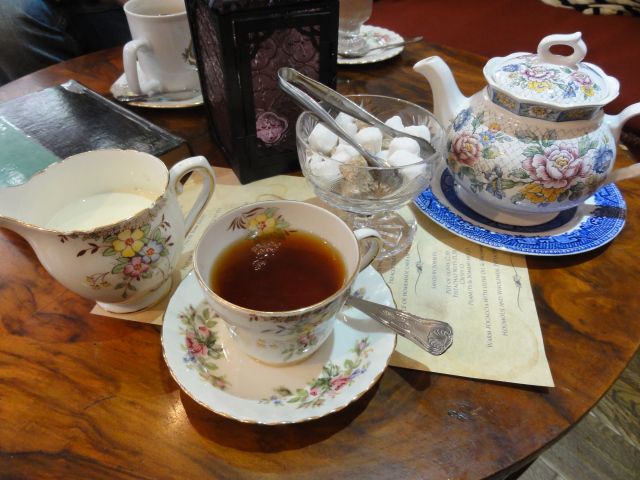 The making of fine bone china has been an English tradition for over two hundred years. For almost as long, china teacups have been used in that other classic custom of the British Isles: afternoon tea. Here, we’ll take a look at the history and modern practice of afternoon tea.

What is Afternoon Tea?

Afternoon tea is not a simple post-lunch pause for Britain’s favorite beverage, but an elaborate, long-standing ritual. The custom involves a mini meal originally designed to stave off hunger in the long afternoon hours before dinner. Tea is brewed and served with milk and sugar, and in addition partakers enjoy sandwiches cut into “fingers”, pastries and cakes, and scones with clotted cream and jam. The meal is typically taken between the hours of 4PM and 6PM.

Humans have submerged fragrant, dried leaves in hot water for thousands of years. Legend holds that the making of tea began as early as the third millennium BC in China. One story attributes the invention to the emperor and herbalist Shennong, who ruled over 4,500 years ago, and is said to have discovered the brew by accident. As he was boiling drinking water, leaves from a nearby tree fell into his pot, and when he drank the resulting infusion, tea was born.

Tea first came to Europe in the 17th Century, where it enjoyed brief popularity in the Netherlands and France. In 1662, Catherine of Braganza married Charles II and included tea chests as part of her wedding dowry. Taking tea soon became a popular ritual in the British court. The drink became more widespread over the ensuing centuries as “Tea Clippers” brought leaves in from China in large quantities.

Tradition holds that the custom of afternoon tea originated in the early 19th century, not long after the development of the process for making bone china. Anna Maria Russell, the 7th Duchess of Bedford, is said to have invented the practice to cope with a gnawing hunger during the long wait for dinnertime, which had become a fashionably late 8pm. The Duchess began by having a private snack with a pot of tea in her boudoir in the late afternoon, but soon invited friends to join her at Woburn Abbey.

By the end of the 19th Century, afternoon tea had become much more common outside the royal families, but remained an elegant, upper-class affair. Society women would dress in their finest gowns and hats for the event.

Afternoon tea was an elaborate ceremony, but by 19th-Century standards relatively informal. Guests were invited verbally rather than with a formal letter and could come and go as they pleased. The host would distribute china teacups, while the hostess was responsible for pouring the tea.

Today, afternoon tea is even more informal, often involving whatever tea happens to be in the pantry and a biscuit for a snack. Fancier instances of the tradition are usually saved for special events – birthdays, baby showers, weekend gatherings of friends – and on such occasions, the hosts bring out their best china for the occasion.

Harry Price is a freelance writer and artist from the south coast who uses his picturesque surroundings as inspiration for his work.  He spends his spare time walking his 3 dogs, rock climbing and cooking.