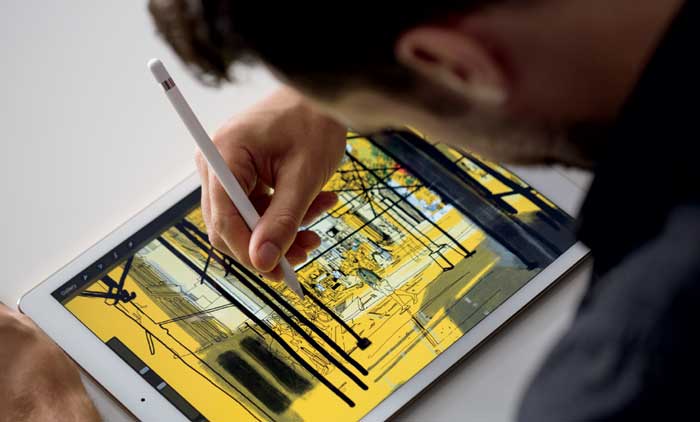 Apple unveiled a new touchscreen iPad Pro designed for the most sedentary users. iPad Pro is a companion piece to the iPad Air 2: The iPad Pro is much larger than other models. The first 12.9-inch Apple tablet has a resolution of 2732 x 2048 finally official, with a thickness of 6.9 mm, operating system iOS 9, It will work with Apple Pencil stylus and a smart keyboard, Apple also unveiled TV box with its own app store and new iPhones.

It thus provided with a fine aluminum shell with a thickness of 6.9 mm. Not bad, and the tablet weighs 713 grams and it will be perfectly possible to hold it with one hand. Many nice things on the side of its data sheet. The iPad Pro well equipped with a 12.9-inch Retina display capable of displaying a resolution of 2732 × 2048, for a pixel density of 264 ppi. The glass panel is entitled to an oleophobic coating similar to that of other mobile terminals of the brand. powered by 64-bit A9X processor. It is supported by a coprocessor movement M9 and the unit will be able to track your activity. So, you can take it with you during your running sessions. Or not, actually.

Connectivity is pretty comprehensive, and include WiFi 802.11ac, Bluetooth 4.2, GPS, GLONASS and 4G for some models. On the side of the battery, Apple also announced a range of 10 hours of battery life, which is pretty good for a tablet format and offering such as high definition screen.