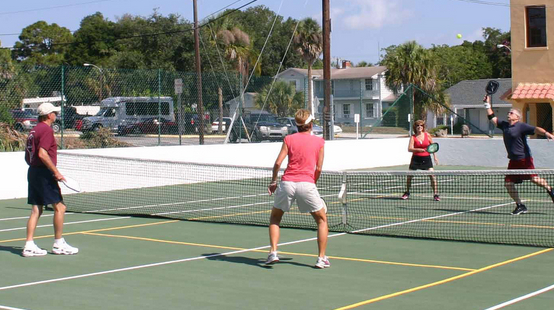 The most attractive part of pickleball is that it is an amazing combination of three exciting games but it is easier to play for people who are not experts in badminton, tennis or ping pong. You only need three equipments for a Pickleball game a net, ball and a paddle.

Rules of the Game –

There are only two main rules in a Pickleball game. The first rule is that the ball served is subjected to the double bounce rule. It basically means that the served ball compulsorily has to bounce once before it can be returned and the first hit by the serving team should also bounce at least once before it is returned to the other team. Once these double bounce rule is finished the teams are allowed to hit the ball even before it bounces.

A fault is when the ball-

The decision for the serving team is simply made with a coin toss. Whoever wins the toss will serve the first ball to the other team and will have the chance to score the first fault. The winner of the coin toss has a choice to choose to serve the first serve or not.