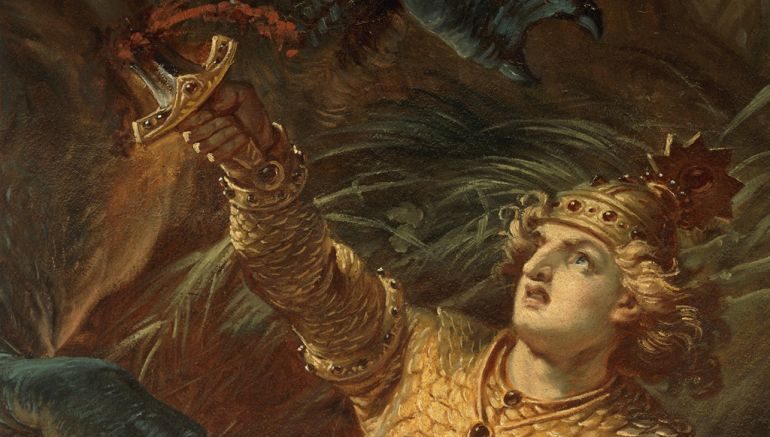 The oldest English poem composed between the middle of the seventh century and the end of the tenth century in the first millennium. It was written in Anglo-Saxon or Old English and describes events in Scandinavia. The version I have is the bilingual edition showing the Anglo-Saxon version alongside this translation by Seamus Heaney.

Warrior Beowulf sails to Denmark to help Prince Hrothgar whose people are being beset by the monstrous Grendel. He is descended from Cain from the Old Testament making him part demon with much strength. Beowulf defeats Grendel by ripping his arm off at the shoulder causing him a mortal wound. After they celebrate their victory, Grendel’s mother bursts onto the scene to seek vengeance for her son. Beowulf again fights her and again defeats her in an under water battle.

After Beowulf and his men are rewarded by Hrothgar they sail home again. Beowulf’s uncle Hygelac is King and Beowulf gives him a gift of many of the rewards he received. There is no petty squabbling between the two warriors and no double dealing and treachery. In time Beowulf becomes King after Hygelac is killed in battle and his son Headred is killed for double dealing. A dragon is mistakenly awoken by a thief stealing a cup from his treasure Horde. Beowulf goes to fight it, knowing it will be his last battle. All of his men run away from the dragon apart from Wiglaf (son of Weohstan) who stays and aids his master in this last battle.

Although Beowulf is boastful and arrogant, he lives his life with valor. His death will see many of the old battles rekindled without someone in his place to keep the peace. I definitely recommend this poem. It was really interesting to see it alongside the Anglo-Saxon and see if I could pick out any of the words (sadly not many!). This is an excellent translation which keeps the spirit of the original poem, but somehow brings it up to date.