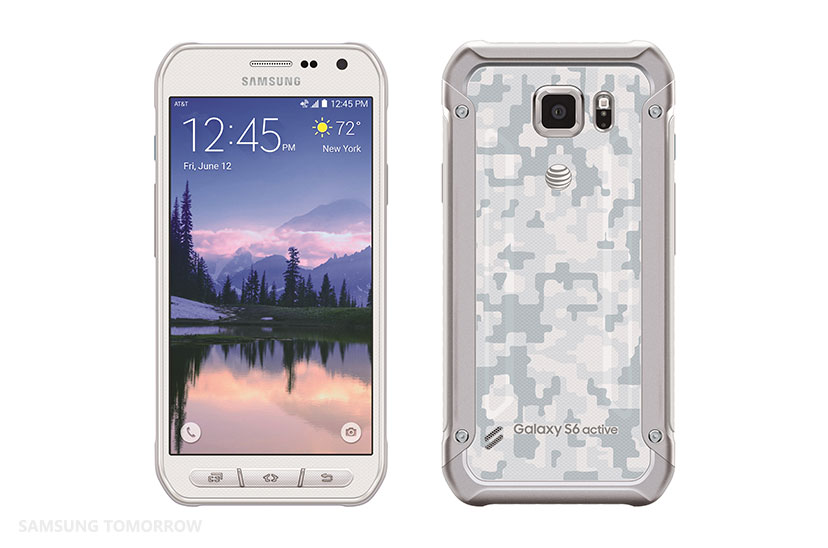 Samsung has hit hard earlier this year with Galaxy S6 and S6 with its Galaxy Edge, Galaxy S6 active is now finally official. However, Samsung Galaxy S7 is still not official, but just rumours. Less elegant than the S6, reinforced this model offers the same features with a much more impressive battery. Samsung Galaxy S6 Active, Enhanced version of its flagship smartphone. The element-defying version of the Korean flagship was just unveiled as an AT&T exclusive in the US.

Aesthetically speaking, for sure, it does not look anything like its two older smart phones. It is much less pretty to look at, even, but this is not surprising because its hull was reinforced to withstand bumps and drops. In addition to the IP68 certification and mil-STD-810G (for resistance to water, shock and dust proof), The high-end equipment of the Active is confirmed. It has, like the S6.

If you need a phone resistant and able to assist you in all your adventures, then it may hold your attention. Especially it is accompanied by a new application – Activity Zone – who can give you valuable information about your environment.

Samsung has opted to keep the same specs. The Active Galaxy S6 is well equipped with a Super AMOLED 5.1 inch display capable of a type definition qHD (2560 × 1440), with Exynos 7420 Octa-core 64-bit processor. Supported by 3 GB of RAM. The storage space reaches 32 GB and it will unfortunately not be possible to extend it through a micro SD port.

For the photo sensor, and it will feature, we can count on a 16 mega pixel on back of a smartphone and a front camera of 5 megapixels. Double tapping the home button will bring up the camera, low light video, high clear zoom, virtual shot, slow motion, fast motion, pro mode, We discover, however, that the battery of the new Galaxy is much better capacity than the S6 with 3500 mAh against 2550 mAh only. It will thus need only half an hour to fill half. Video Definition recording (in pixels) 3840 x 2160, GPS Software Google Maps, Navigation, Wi-Fi support 802.11n / AC, With bonus, the wireless charging, the possibility of regaining 50% of battery life in 30 minutes and that, when the gauge displays only 10% make calls and send text messages for another 24 hours. Finally, it works with Android 5.0.2 Lollipop.