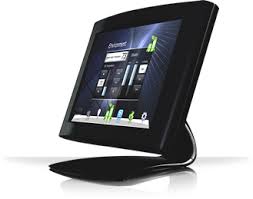 The Internet of Things (IoT) allows seemingly ordinary devices to be linked up to each other and to the Internet in order to work together to automate a house or apartment. Most smart devices are capable of being controlled remotely through a designated device or app. However, when a whole home of these apps and devices comes together, the many separate methods of control can get to be a little much.

Back in the 1980s, most computers were said to be “IBM Compatible.” Though there were countless different computer manufacturers pumping out machines, Microsoft and IBM acted as a sort of authority that set the standards that this horde of manufacturers followed. This is not the case with current Smart Home and IoT products, where the lack of a single company setting a universal standard has led to a “Wild West” type of situation, with a million different apps being used to control a million different devices. It’s led to its own kind of “Remote Control Overload” that makes the audio/video home products situation—visualized in the photo above—look like a walk in the park.

The Internet of Things

The Nest Learning Thermostat is a smart thermostat made by Nest Labs, a subsidiary of Alphabet, the owner of Google. On the surface, it is a connected thermostat that lets you remotely control the temperature with an Android app. However, it also learns—finding out your heating and cooling patterns, turning off the central heating or air conditioner when not needed, and even figuring out the time needed to heat or cool your home to the desired temperature while taking the weather and other specifics into consideration. Every time you make an input, it remembers that input and will eventually start making changes for you.

One of the really useful things about Nest is its app’s ability to work with your heating or cooling systems to analyze how they’re being used. It breaks down what your hardware is up to across individual days and can be used to further tweak how much energy you’ll end up using. It shows you days where your house or apartment was particularly energy efficient, and it even tells you why—whether it was because of user interference or the weather. It also monitors the humidity in your home and uses that data to decide whether or not to turn on the air conditioning or to just run the fans to circulate air.

The Nest Thermostat is just one part of your heating and cooling system, but it can keep an eye on the rest of it. You’ll get an alert on your phone if there’s something wrong – like temperatures that are so low your pipes could burst. And if it looks like your furnace is acting up, the Nest Thermostat will send you an alert, so you’ll know your home is safe.

In most cases, installing the Nest Thermostat should be a breeze—just connect the wires from your existing thermostat and you’re good to go. The Nest Thermostat should be compatible with most HVAC systems and shouldn’t require a furnace replacement to work. If you need help with installation or you think your setup might require some extra work, go to Nest’s website to get in touch with a Nest Pro Installer.

One way around “Remote Control Overload” is to find smart devices that are designed to connect to one another. One example, Keen Home Smart Vents, are connected vents that are compatible with the Nest Thermostat. They allow you to personalize the temperature of individual rooms around your home using an app on your phone. A Nest Thermostat can communicate the current state of your HVAC system in real time with the Smart Vent system, giving it insight into how your home heats up and cools down, helping the Smart Vents to more intelligently meet your temperature and airflow needs.

Automated window coverings offer a worthwhile upgrade to traditional window blinds. They can easily be programmed to open or close or shift depending on the ambiance you desire for the room. Being motorized and wireless, they have a cleaner look than traditional manually-operated shades and blinds. They can be programmed to respond to the sun and thereby safeguard your interior and furnishings from damaging ultraviolet rays. These motorized sun shades also result in reduced energy costs, by reflecting the visible sunlight back outside when you are not home; lowering your monthly bills and your carbon footprint.

Smart locks don’t just let you come and go as you please—they can also monitor who is entering and leaving your home or allow you unlock your door with your phone, voice, or fingerprint. They can work with other home automation devices to trigger at certain times or under certain conditions. Most locks can integrate with other connected home devices, like the Nest Protect smoke alarm or Apple’s HomeKit.

Installing smart switches allows you to automate the use of lights, outlets, and ceiling fans in your home. Wi-Fi enabled switches can connect directly to your home’s network, while other, proprietary connection systems may require installing a central hub. Some smart switches offer built-in smart dimming capabilities and some come with full-color touchscreen displays, built-in speakers, or microphones for intercoms.

Many companies have attempted to take up the role of technological standard-bearer within the Internet of Things ecosystem. Chief among these are Apple and Samsung with their respective HomeKit and SmartThings Hub.

Apple’s HomeKit is a set of protocols for how smart-home products should communicate and work with Apple’s mobile devices. The Home app serves as a central point of organization for your connected home setup. Its Control Center gives you a central hub from which to manage your gadgets, featuring icons for all your devices that let you turn things like smart switches and connected lights on and off just by tapping. All in all, HomeKit is intended to make it easier for smart accessories to communicate with and be controlled from a central hub.

Like Apple’s HomeKit, the SmartThings Hub is Samsung’s attempt to create a grand unifying control system—in this case, a box—that connects all the smart devices. The Hub supports Wi-Fi-connected devices as well as devices using ZigBee and Z-Wave, two of the most broadly-used wireless home-automation standards. As a result, most devices are at least capable of communicating with the SmartThings Hub, provided that they don’t use an isolated proprietary system. Like HomeKit, it features an app that can be used to control the Hub and its many connected devices.

While the wild and varied ecosystem of smart devices may not yet have a unifying standard to let them truly connect to one another, many companies are fighting to be the one to fill that need. It remains to be seen who will prevail, but such a standard will allow home automation to finally reach its full potential.